LeBron James’ son is returning to the Dallas area.

LeBron James Jr. (known as Bronny) won’t be the only big-name talent taking part in the Thanksgiving Hoopfest. Not even close.

The Hoopfest announced Tuesday the list of teams that will be competing Nov. 26-27 at Sandra Meadows Arena in Duncanville, and the event will feature six of the top 25 recruits in the nation in the Class of 2022, according to the 247Sports composite rankings. The top player on that list is UCLA pledge Amari Bailey, a five-star guard ranked as the third-best player in America, and a teammate of James at Sierra Canyon in California.

James, rated the sixth-best combo guard in the nation in the Class of 2023, has played in the Thanksgiving Hoopfest before. Two years ago, Sierra Canyon beat defending 6A state champion Duncanville 66-63 in a game that drew a packed house at American Airlines Center.

Another team competing in the Thanksgiving Hoopfest will be Corona Centennial from California. In June, Corona Centennial beat James and Sierra Canyon in the Southern Section Open Division championship game with LeBron James and Drake sitting courtside.

The other Class of 2022 top-25 national recruits taking part in the Hoopfest will be Richardson’s Cason Wallace (No. 7), Arkansas pledge Nick Smith Jr. of North Little Rock (No. 9), Oregon pledge Kel’el Ware of North Little Rock (No. 21), Texas pledge Arterio Morris of Kimball (No. 23) and Anthony Black of Duncanville (No. 25). Wallace, a five-star guard who holds offers from the likes of defending national champion Baylor, Kentucky, Tennessee and Texas, is the top uncommitted player in the country.

Duncanville has won the last two Class 6A state titles and just added Black as a transfer from Coppell. Black, a five-star guard, was a second-team all-area selection last season and averaged 16.3 points, 6.8 rebounds, 3.5 assists and 2 steals per game and was the District 6-6A MVP.

The list of 2023 marquee recruits is headlined by J.J. Taylor from Kenwood Academy in Illinois. The nation’s third-ranked player is joined by Duncanville’s Ron Holland, who helped the USA Basketball men’s under-16 national team win the FIBA Americas U16 Championship in late August in Mexico, as well as McKinney’s Ja’Kobe Walter.

On the girls side, there will be a matchup of nationally ranked teams — DeSoto vs. Montverde Academy from Florida. Five-star, 6-2 forward Janiah Baker of Montverde is rated the third-best player in the nation, while 6-4 all-state forward Sa’Myah Smith of defending 6A state champion DeSoto is rated the fifth-best player in Texas in the Class of 2022.

The list of matchups for the Thanksgiving Hoopfest is scheduled to be announced Oct. 18.

Here is the list of teams that are scheduled to compete in this year’s Thanksgiving Hoopfest: 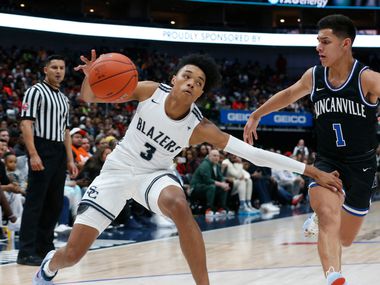